July 13
On our excursion to Verona to went driving towards Lake Garda and found Gardaland, Sea Life, a Water Park and several other amusement parks. We decided that Sea Life might be a good place to take the kids so we packed into the van with the picnic basket and headed out again! Now the price for Sea Life was a lot more then any of the other tourest places we had been. It was 45 euro for me, Brandon and Bella this time. And if I had to give advice to people, it's not worth it. Granted the kids had a blast but it was soooooo small!!!!! When you've been to sea world or an Aquarium in the US it's nothing compared to them! However, they have some really neat things in this Aquraium. In several of the tanks they had a place where kids could walk in and stick their heads into little holes so they could see the inside of the tank. They also had the water tunnel where they had sharks, stink rays, and a ton of fish. We got to sit and check out the Sea Lion feeding (which was in Italian) so that was neat too. On the way out there was a play ground with a pirate ship and a photo booth that was cool too but cost 3 euro per person. All in all it was fun for the kids and to see their faces when they saw the fish. Espically Ben since he's old enough to know what they are now! 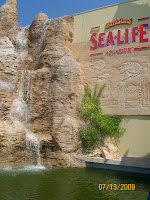 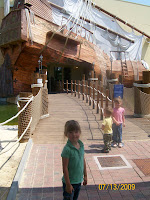 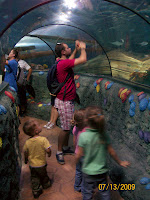 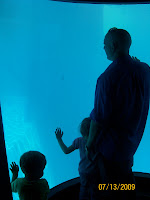 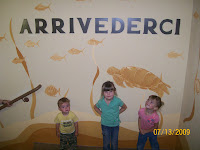 On the way home from the Aquarium we decided to finally stop at the Castle that you can see from the Autostrada. I had looked it up online a bit and found out that the Centro of the town of Soave is actually inside the castle walls. 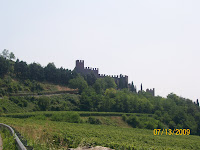 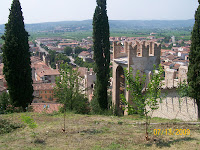 There are only three ways into the town and that is from one of the three main Towers. 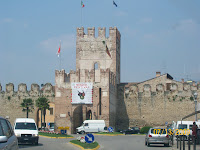 We parked the van in one of the many parking areas and got out and walked for a while. It was really cool to see the castle walls and the buildings that were rebuilt. Soave has it's own winery too but it was closed when we were there. If you look close to the wall pictures you will see ladders or stairs in the towers. When the castle is open you can walk around the whole length of the walls. At parts there isn't any fencing or anythig to keep you from falling but I'm sure it's not meant for kids anyways. I'm not sure how much it cost to do the tour and all that because it was Closed when we were there but we do plan on going back to find out. 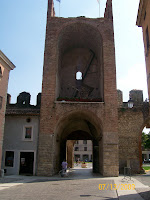 By the information center they had a huge playground area that the kids loved playing on. We were actually there for about an hour! This swing was the coolest. It is kind of like a tire swing but has netting in the bottom and doesn't spin. The kids played on this one the most. Brandon also got in it but we got in trouble. Apparently its for the "kids" not adults. LOL....I didn't figure it was such a big deal since we were the only ones at the park but I guess Italians are a little more picky about who plays on the play grounds. We still had a blast though. It was a great day and we have done so much already! 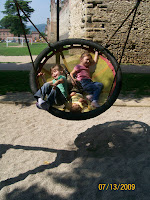 The next post will be about our camping trip to ROME!!!!! And the end of Block Leave......