So we started off block leave with an empty tank of gas. We stoped at the gas station on our way out of town and spent 89,50 EURO to fill up the van!!! ($124.93) We didn't really know where we were going to go but had several places in mind.
July 1

We decided to find the winery in Vo that sells the best wine I've tasted! One red and one white, both of which are sweet wines! We got lost for a little while but ended up finding several castles that are close to the house and we finally found our way there with 5 minutes to spare before closing time! We bought 14 bottles and it only cost us 55 Euro! They were only 3.95 Euro a bottle! At the winery you can actually get cheese and meat and sit there and do wine tastings. Of course it costs to do that but it would be a fun experiance. We'll be doing that one day too! After finding it the long way it will only take us about 25 minutes to get there the next time. I can't wait to go back. It's so awesome! And I'll be sure to take the camara next time too!
July 2
We packed a picnic again. We knew of a nice little park that was fenced in and all so we thought it would be good for the kids to get out of the van and run around for a bit. Well, after driving around a couple hours and looking at stores (mostly statue place) and when the kids started screaming they were starving....lol.....we went to the cute little park. I'm not sure why but the gates on both sides were closed so we couldn't get in. The kids cried a bit because they wanted to have a picnic so I took the car seats out of the back of the van, laid down our stow-and-go seats, threw the french fries out of the van to feed the birds (hehehe), spread out the picnic blanket, set out all the food and we had our own little picnic in the van! Granted I didn't get pictures of that fun little ordeal but we had a great time anyways. Saving those little ketchup and mayo packets from BK really come in handy at times! The picnic basket mom and I made out of an old suit case is getting so much use over here. I have to admit, we didn't use it a single time while we lived in the states but so far we've used it 3 times here! And it's going to get a lot more use between now and the end of block leave! Thanks for helping me with it mom!!!
July 3
We finally found the big mall, Le Piramidi Mall. We were told it was full of clothes stores but it really wasn't much different then the malls in the states. There were a ton more places for the kids to play, things for them to ride on that kind of stuff, there were several escalators in stead of the usual one on each end you have to walk forever to get to, and they had 3 arcades. One of them had pool tables and bars, kind of like a Dave and Busters but a lot smaller. Guess that's something we'll have to do when we don't have the kids with us! There was also an electronics store and a grocery store. In the electronics store I took a picture of this tv. It's a 55" flat screen, nothing real special if you ask me and the price was soooo rediculas! It was originally 3,999 Euro but was on sale for 3,499 Euro! ($4884.14) I couldn't even imagine paying that much for a tv! We've only spent about $2,000 on our projector and it's bigger and nicer then any tv I've seen! All in all the mall was just another mall. A lot of stores that have clothes, jewelry, and more or less a lot of breakable things that I don't want to take the kids into. It's so wierd here. In most of the larger stores and malls there is a play place you can pay to drop off your kids while you shop. We've thought about doing that but I'm not sure I want to leave our kids with Italians that can't understand if they need something. Maybe one day. Oh, and the mall had a McDonalds! We were going to go but I need to learn how to order food in Italian first. I'm curious if everything there is the same as the states! I'll let you know when we finally make it in there! lol 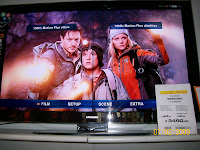 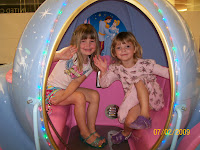 Today we also had a ton of people over. Including the kids there were about 20 people here. We set up the beer pong table and the guys played a million games. The drinking started early (around 2) so they all left around midnight. 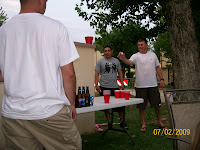 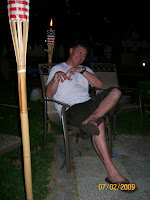