Jesolo Beach AGAIN! Yes Please! We have found a new favorite hang out!!!! Next time we are thinking about renting one of these......a paddle boat WITH a slide! How fun would that be? Think the kids would be ok on one? I think it's time to find out for sure!!!!! 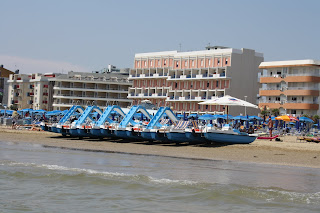 This time we brought bigger buckets and better shovels since the little plastic shovels we got at the PX broke when we tried digging with them last time. This time it was much easier! 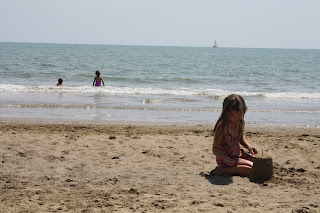 We decided to buy floaties today too and they had an awesome store real close that we stopped at. These floaties were only 6 Euro each and we bought the pump for them for only 3 Euro! Not too bad in my opinion. And I thought they were the littler ones when we got them, nope, they were big enough for Brandon to play on them too! 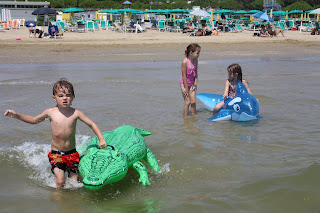 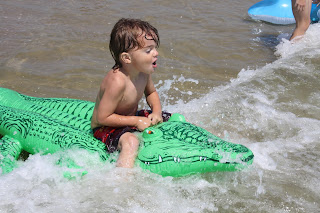 The kids were a lot braver this time around, went out a lot deeper and got their heads under the water a couple times! 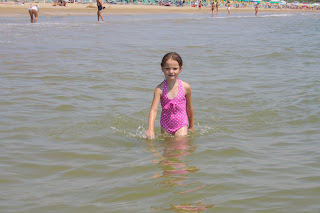 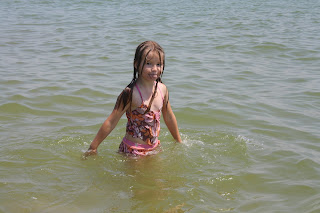 Yes, he fell off that thing several times :) Silly man he is! 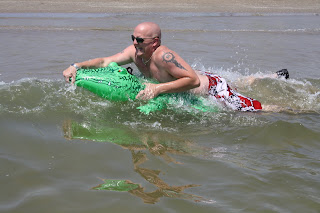 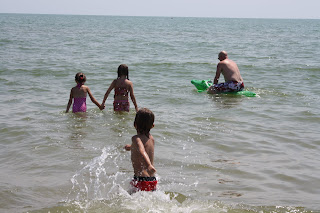 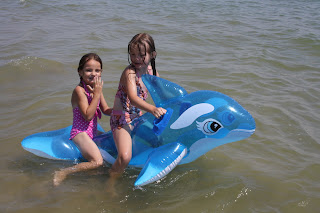 This is what the beach looks like after 3 American kids take over! LOL 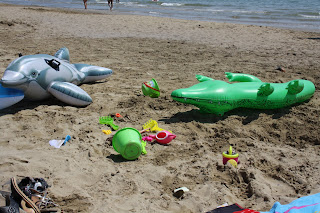 The funniest part of the whole day was when we were out in the water and Benjamin just started screaming and running full speed BACKWARDS saying he was touched by a thingy with legs and claw thingys. He was terrified!!!! And I was laughing hysterically!!!!! Does that make me a bad parent??? LOL You would have had to been there. The poor crab was dead so we know it didn't pinch him or nothing but the waves were carrying it in and out and when one wave brought it close enough towards Ben to touch him he flipped out! I love my little scaredy puss :) 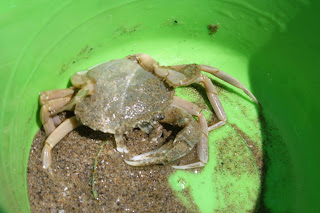 Since we were going straight to Venice after our trip to the Beach today we decided to stop at the McDonalds to eat. Figured it would be a lot cheeper then eating at the Hard Rock in Venice again. It still cost us 35 Euro for the 5 of us though. That's over $50! Is it going to be like that in the states???? It's a good thing we don't go out to eat much! 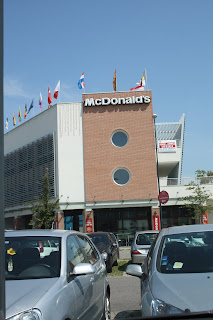 I haven't had McDonalds since my Mom and Dad came to visit last year so I had to have the Chicken Nuggets and Fries and BBQ sauce! Oh so yummy!!!! Man how I've missed Mc-y D's!!!! 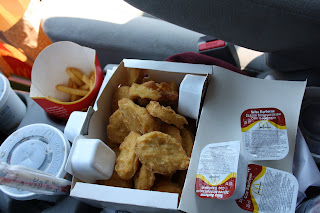 and this next picture is hillarious in my opinion. On top of this McDonalds there were flages of lots of different nations. We didn't see the American Flag but it could have been in the back more. But if you look close at the Canadian flag, the red and white one with the red oak leaf in the middle, yeah, that one that kinda sticks out. Well, look close, IT'S UPSIDE DOWN!!!!! hahahaha Wonder who did that one and if they are ever going to notice it's like that! LOL 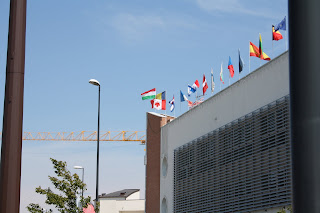 Oh how I wish we would have gone to Jesolo Beach a long time ago! We would have been going here every weekend we wanted something to do instead of going to Verona! It cost the same amount basically but the kids have so much more fun at the Beach! Oh well, at least we've had a great time the past two times we've gone and we are even talking about going more even though we leave in two weeks!!!! Today I did however get sun burnt :( Sucky but hey, I'm a big girl, I'll survive it (and learn from my mistakes LOL)! I am sure going to miss Italy!
Posted by Unknown at 10:21 PM