Every October Italy has a Chocolate Festival. I know, it's the most incredible thing in the world!!! Imagine 50 booths of nothing but chocolate. Every kind you could possibly imagine from regular chocolate to chocolate tools. I bought several of the chocolate tools hoping to mail them to family but a lot of them got broken on the way home because of the kids. They had everything from carberators for cars to paint burshes and light bulbs. They had pliers, screw drivers, hammers and saw blades. It was awesome to see them and they didn't look at all like chocolate. Almost too good to eat! 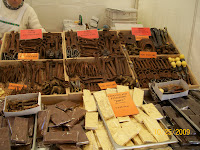 Most of the booths would give you just a sample taste if you wanted one. At one we got chocolate covered almonds and Brandon took a piece of chocolate that he didn't know what it was. He said it was really good then we walked away and his mouth started burning! I couldn't stop laughing it was so funny! That'll teach him to just eat stuff when he doesn't understand what they are telling him it is! I also didn't know what I was getting myself into when I bought 10 Euro worth of these little guys. They are so cute and colorful but man, some of them were soooo descusting!!! The little ball on the right had some type of creamy yellow stuff in it that was bad and then the second one from the left tasted like drit. Seriousily....just like dirt! The blue one is Liqour (very strong) the green one is Lime, and other then those I'm not sure what they were. One was dark chocolate, one was Coffee, one was just the milk chocolate and oh one was bannana. I have no clue which was which but some were good and some were really bad! 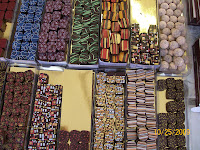 More of the wierd things they had were chocolate eggs and chocolate cheese. We didn't taste these or anything, they just looked nasty! 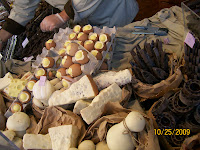 The logs of chocolate had to have been amongst my most favorite. It's amazing how big they got some of those logs to be and they tasted incredible too! Wish I could make my own chocolate like that! 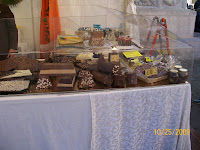 At the end of our trip I had to buy a chocolate tea cup and spoon. It's really too cute to eat. I was trying to take a picture of it and this Italian guy wanted me to take his picture too so I couldn't help it. They are just as big of dorks as the Americans! LOL. I can't wait until next year rolls around when I have more money to spend when I go. I'll get everyone something next year!!! 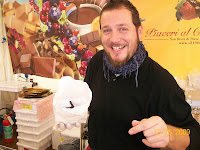